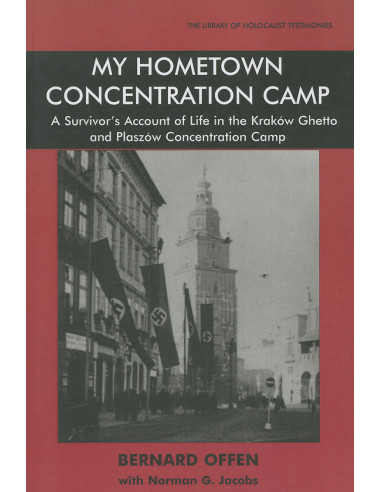 My Hometown Concentration Camp tells the story of the young Bernard Offen's endurance and survival of the KrakÃ?Â?Ã?Â?Ã?Â?Ã?Â3w Ghetto and five concentration camps, including PlaszÃ?Â?Ã?Â?Ã?Â?Ã?Â3w and Auschwitz-Birkenau, until his liberation near Dachau by American troops in 1945. The author tells of his experiences in the ghetto and camps and how he set out, after the war, in search of his brothers, eventually finding them in Italy with the Polish Army. Having returned to the United States, Bernard Offen was drafted into the US Army to serve in the Korean War. After the war, he founded his own business and built a family, both helping to restore a sense of normality to his life. This was the start of his own unique process of healing that led, ultimately, to his retirement and decision to dedicate his life to educating audiences around the world about his experiences during the Holocaust. Bernard Offen's story recounts his one-man journey across America, Europe, Israel, and back to his native Poland, and his development as a filmmaker, educator, and healer. My Hometown Concentration Camp will touch readers through the strength of the author's self-determination to attempt to confront and conquer the traumatic experiences he witnessed as a young man.