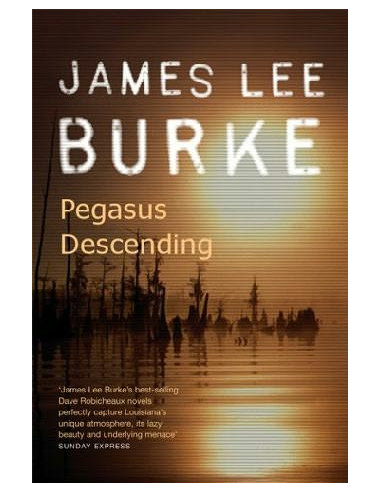 Admirers of James Lee Burke long ago ran out of adjectives to praise their hero, and the only puzzling thing about his remarkable literary achievement in the crime writing field is that although his sales are more than respectable, many a lesser writer outsells him. This is doubly ironic, as a book like Pegasus Descending proves that, unlike that other much acclaimed master of the American crime novel, James Ellroy, Burke is remarkably consistent. While Ellroy's more recent books have struck off into some very strange territory that has alienated many of his readers, Burke continues to do just what his readers expect: deliver the most pithy and sweeping writing to be found in the crime field. In Pegasus Descending, we are once again back in the comfortable (if eventful) company of Dave Robicheaux, Burke's long-time protagonist. Dave has finally brought his excessive drinking under control, but still suffers from guilt over a tragic event that he was unable to prevent due to his drunkenness. A friend of Dave's, a gambling addict, had died in an armed robbery that he had been forced into. After the passage of many years, various events in Dave's life have brought him back into the orbit of the individuals responsible for this violent death. As readers of Burke will realise from this, Dave is completely unable to let the past rest, and becomes dangerously involved, this time with some very sinister men. In such books as Lay Down My Sword and Shield, The Lost Get-back Boogie and Cimarron Rose (the latter book won the prestigious Edgar award, as did the equally impressive Black Cherry Blues), James Lee Burke has carved out a territory that is very much his own. While the plotting of his novels is as adroit as one could wish, Burke is one of the latter-day descendants of Raymond Chandler who has learned a very important message from the Master: it's character and atmosphere that counts most in sprawling American narratives like this, and in this area, Burke is nonpareil among current practitioners. As ever, observations on the social mores of the day are folded into the narrative, but at the centre of it all is, as ever, the wonderfully drawn Dave Robicheaux.