Atlas of the Holocaust 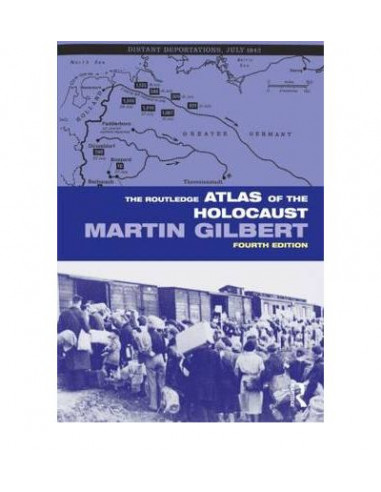 The graphic history of the Nazi attempt to destroy the Jews of Europe during the Second World War is illustrated in this series of 333 detailed maps. The maps, and the text and photographs that accompany them, powerfully depict the fate of the Jews between 1933 and 1945, while also setting the chronological story in the wider context of the war itself. The maps include: historical background - from the effects of anti-Jewish violence between 1880 and 1933 to the geography of the existing Jewish communities before the advent of the Nazis; the beginning of the violence - from the destruction of the synagogues in November 1938 to Jewish migrations and deportations, the ghettos, and the establishment of the concentration camps and death camps throughout German-dominated Europe; the spread of Nazi rule - the fate of the Jews throughout Europe including Germany, Austria, Poland, Greece, Yugoslavia, Bulgaria, Russia, Denmark, Norway, France, Holland, Belgium, Italy, and the Baltic States Jewish revolts and resistance; acts of armed resistance, fighting in the forests, individual acts of courage; Jews in hiding - escape routes, Christians who helped Jews; and, the death marches - the advance of the Allies and the liberation of the camps, the survivors, and the final death toll. This revised edition includes a new section which gives an insight into the layout and organization of some of the most significant places of the Holocaust, including Auschwitz, Treblinka and the Warsaw ghetto, maps that will be especially useful to those visiting the sites.